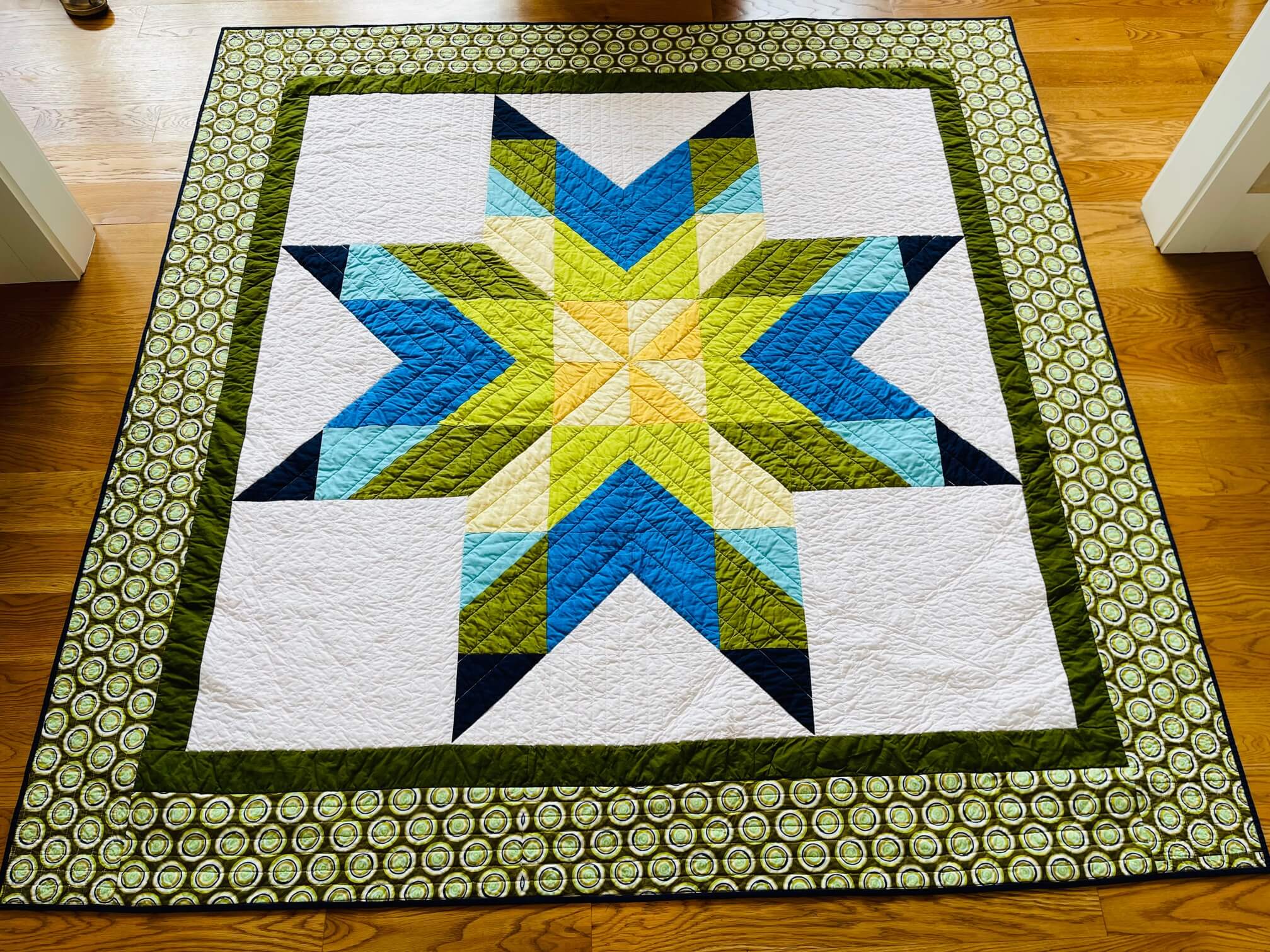 The lone star quilt is one of the most recognizable quilt patterns in American quilting history, and with good reason.

The sharp 45° angles of the star quilt points are eye-catching and memorable, not to mention the enormous eight-point star is timeless and beautiful.

Wanting to keep that timeless and adored silhouette, we have come up with a perfectly modernized lone star quilt block design that beginners and seasoned pros alike can create.

What Is The Lone Star Pattern?

Lone Star quilts are characterized by their eight-pointed star in the center of the quilt top. Each side of the quilt has two large points that point north, south, east, and west.

Traditionally, the large 8 point star will be centered on the quilt top, though I have seen a few modern interpretations where the star is offset to one side.

For our Modern Lone Star pattern, we wanted to keep the tradition of having the star as the focal point in the center, but with different blocking and piecing to give it a fresh, contemporary vibe.

Like many quilt patterns, it is quite challenging to pinpoint the exact origin of the lone star pattern, but I found some fun facts about it and learned quite a bit about the importance of this particular pattern in US history.

The Lone Star quilt has been around for centuries, and it doesn’t seem to be fading anytime soon. It is, personally, one of my favorite designs because of its timeless beauty and versatility in modern quilting.

The Lone Star Quilt Pattern: Our Modern Approach to a Traditional Design

Since this is one of my favorite designs, I asked myself how to make a lone star quilt pattern that is unique while maintaining the traditional design. We wanted to put a modern spin on it for a new generation of quilters and create something easier for beginners and those who may not want to use “Y” seams. Here are the ways that I kept the heart of the Lone Star pattern while modernizing it.

15 Of The Most Beautiful Double Wedding Ring Quilt Designs

Nostalgic Vintage Quilt Patterns From The 1920s And 1930s

3 Ideas to Change Up Our Lone Star Quilt Design

To create your own quilt from our pattern, you could easily switch up the color palette and use the same placement I did for the example quilt and still make a gorgeous quilt.

You could also switch up the color placement and make something completely different and unique to you and your style.

Here are three different mockups to show how different you can make your quilt by changing the colors.

In this first example, the arrangement of the color variations is almost the same as the original quilt pictured above, but I used a mid-century modern color palette.

For this mockup, I wanted to use a warm color palette and arrange the colors slightly different from the original to show how different each quilt can look with a bit of creativity.

Earth tones are in vogue right now, so I designed an example using them for this mockup. I also switched up the color variations significantly in this last mockup.

See how different each mockup is, and yet I used the same pattern for each one. This pattern is highly versatile and user-friendly. We also include a bonus coloring page in the pattern, so if you want to play around with color combinations, you can do so and print out as many coloring pages as you would like.

We love this new pattern, and it was so much fun designing and creating it.  We hope you’ll enjoy making your own Modern Lone Star Quilt with this pattern.

Not only is the pattern beginner-friendly and easy to follow, but it can also be a fun project for quilters who are more experienced and want to add a modern spin to this traditional design. Thank you all for your support, and if you do create a quilt using our pattern, we would LOVE to see it!

This site uses Akismet to reduce spam. Learn how your comment data is processed. 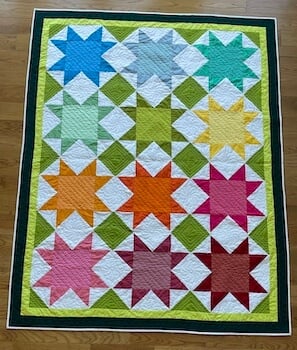 A Beginner’s Guide To Binding a Quilt